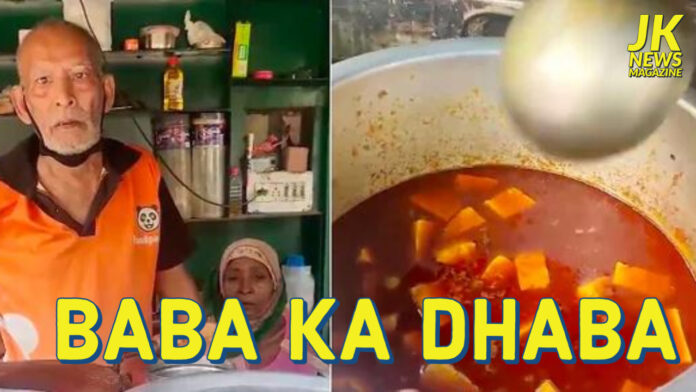 Baba Ka Dhaba: Different social media platforms have different influence on different groups of people. On one side you can experience the end of the world on Twitter, while Facebook and Whatsapp are full of unreliable information, Instagram plays on its own type of content.

The community has developed over a decade and after what happened with ‘Baba Ka Dhaba’ its positive impact has become even more visible. More than 30 million people viewed the viral video of the elderly couple who happen to own the food stall.

The video was shot by a food blogger named Gaurav Vasan, he is known for promoting the vendors of street food and small restaurants on his social media accounts. He also runs a Youtube channel named, Swad official and the Baba Ka Dhaba video was his 136th post on it. READ MORE : Imposing Property Taxes In Jammu And Kashmir, Another Impulsive Decision By…

The story of the most viewed video on food vlogging

Gaurav Vasan has been passionately promoting small scale restaurant and food stalls owner through the medium of his social media accounts. Recently, he posted the vlog of an elderly couple who run Baba Ka Dhaba in Malviya Nagar of South Delhi.

In that video, the couple was seen speaking with tears in their eyes while they continue to complain about the decreased number of customers after the coronavirus break out and lockdown.

The video gained immense popularity and this made it the most viewed video on food blogging till now. After that, the video went viral and people got the right influence as a result, from the very next day there were wholesome gathering at Baba ka Dhaba.

Is it one of the best thing that happened due to social media?

Answer to this question is pretty simple, the elderly couple got the happiness they deserve so obviously yes. Where we can only spot negativity, outrage and trolls on social media people shared the video to such an extent that it caught the attention of digital celebrities as well as mainstream celebrities.

Now, Baba ka Dhaba has become a prominent spot for enjoying a meal in the southern part of Delhi. When the video was shot, the couple was upset and sad due to lack of money since lockdown was a major setback for them but now they seemed to be happy and their smiling pictures are getting viral on social media.

Along with that, print, as well as mainstream media, have taken interest in covering the story of this couple and their food stall that rose to instant fame. People are seen taking selfies with them as well and corporate games have started from online food delivering apps like Zomato to big brands like Pepsi are associating with the stall now.

Kanta Prasad the owner of the food stall along with his wife and their two sons run this food stall. The menu of Baba ka Dhaba includes Matar paneer, rice, chapatti, dal and green vegetables and due to the massive hike in their orders, the owners have decided to increase the purchase of raw materials well. To conclude, if such things happen more frequently an ideal situation might occur where deprived people can be uplifted and classism could also exist at the same time.