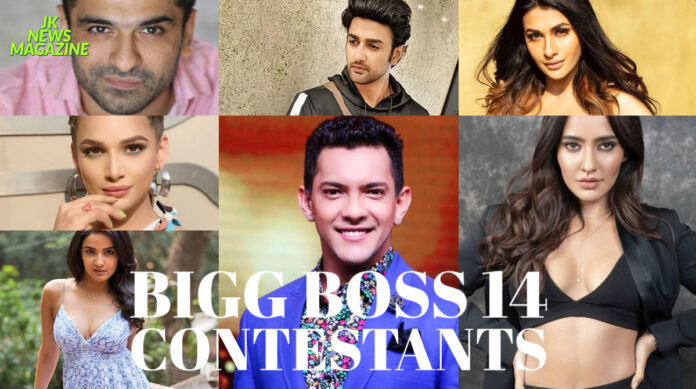 BIGG BOSS 14 Contestants 2020: The world has been greatly affected by the outbreak of coronavirus but Indian television Industry is catching up with its shows quite quickly. Recently, the 14th season of a very popular Indian tv shows Big Boss is all set to get telecast on 4th of October, 2020.

Fans of this show were eagerly waiting for the announcement of this year’s contestant and now when the list of the participant has been out the fans cannot keep calm.

However, looking at the new normal with respect to the pandemic situation in all over the world makers are bringing Bigg Boss 14 with a new twist.

This year few contestants will join the controversial house of Bigboss 14 2020 few weeks after the show will go air for the first time. Let’s go through the 7 confirmed participants of this year’s big boss.

Naagin Is Ready With Her Swag

The actress of popular Indian daily soap Jasmin Bhasin is all set to be seen in the house of Bigg Boss 14. Recently she was also the part of Khatron Ke Khiladi- Made In India, Bollywood masala film director Rohit Shetty was hosting the show.

Jasmin has always denied the fact that she will be able to cope up with a reality show as a big boss but as her name is confirmed now it seems she is ready to take a challenge.

In several tv interviews, she has already talked about the big boss and always claimed that she is not fit for that thing but as Contestant in Bigg Boss 14 list is out she was one of the celebrity. The actor from daily soap “Guddan Tumse Na Ho Paega” is also included in the list of participants for Bigg Boss 14. Along with that, Bollywood starlet Neha Sharma is also said to be the part of this show.

She is considered as a big celebrity as it will be her debut appearance on national television on work front she was seen recently with Sidharth Shukla in an album. Siddharth was the winner of Bigg Boss 13, he was the finalist with Asim Riaz. Neha Sharma is not seen in many films but she has worked with some big names like Vivek Oberoi and Emraan Hashmi.

On the other hand,  she has a great presence on social media with a massive 10.8M followers list on Instagram. Her bold attitude and raunchy looks will surely spice up the things in this season’s show. As the Leaks out of contestants for Big Boss 14 revealed film and TV star Eaijaz Khan is also said to be the part of this season. The actor claimed to stardom with an appearance in films like Thoda sa pyar hua hai thoda hai baki and daily soaps like KKavyanjali. The actor has been quite vocal about his opinions and personal life in media and that could be a good reason to be in a show like Bigg Boss 14.

Along with that, bold Tv actress Pavitra Punia is also part of this season, she has been in controversies because of her love affair with Paras Chhabra. Last but not the least, son of singer and music composer Kumar Sanu will also be seen in the much-talked show. Earlier, son of Udit Naraya popular TV anchor and singer Aditya Narayan was also considered for the show but after he refused to be the part of it Kumar Janu replaced him. Along with Kumar, actress Naina Singh will also be seen in the show. Naina Singh started her career with Splitsvilla and rose to fame with several other projects.

So, embrace yourself for the real drama