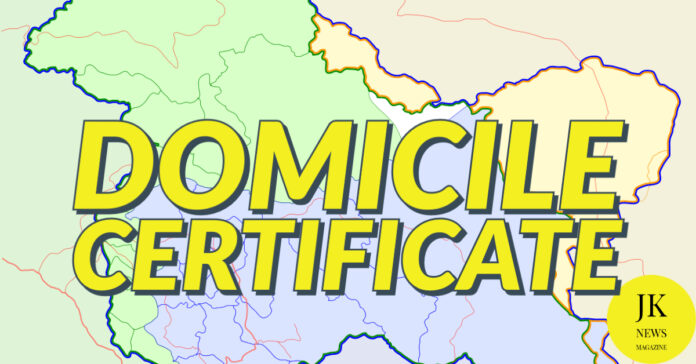 Domicile Certificate J&K UT: Can You Get It? Let’s Talk About Eligibility & Procedure

On the 27th of June, the administration of Jammu and Kashmir has begun the procedure of domicile certificate distribution. This distribution is done among people who come from different sections. The recipients of these certificates have lived in UT (union territory) for the past few decades.

However, they were not able to receive the legitimate rights of citizenship. Tehsildar (applicant’s residing area) is liable to issue these domicile certificates. With the help of online facilities and services, a candidate can also apply for citizenship on the internet.

Candidates can get their online certificate by visiting https://jk.gov.in  after registering with all the required particulars. Once registration is done, the candidate can log in on the official site and fill the application for a certificate.

Eligibility for the domicile

Any person who has been living in Union Territory for about fifteen years, or who has done seven years of their studies could be considered eligible for granting the domicile certificate.

Along with that, if a person has appeared for the examination of 10th or 12th standard in an institution located within the `territory he or she will be considered eligible.

However, there is a condition that the officials from the above-mentioned organizations must have served at least 10 years of their duty period in Jammu and Kashmir. Who else can get the certification?

Apart from the eligibility criteria discussed above, there are certain other conditions in which a person can get a domicile certificate.

All the migrants who have done registration under the commissioner of rehabilitation, as well as relief, could get the domicile certificate of Kashmir. Along with that, their children could be also considered as eligible for the domicile status.

Jammu & Kashmir’s residents residing outside its territories for the purpose of business or some other employment are also eligible. The children of such people will also be considered as eligible for the domicile certificate.

The guidelines and rules provided include a normal process in order to issue the Jammu & Kashmir’s domicile certificate. The timeline of about fifteen days should be there for the issue of the certificate and after that applicant can approach the authority of Appellate. The Appellate Authority’s decision depends on the authority of issuing.

Along with that Appellate authority’s order should be compiled in the time period of seven days. In case of failing to do so, a deduction of 50,000 INR from the salary is done in the form of penalty.

PRC and migrants in Kashmir

People who are permanent residents in the Jammu & Kashmir state and the competent authority has issued them PRC (permanent resident certificate) before 31st of October, 2019 are also considered as eligible to be the recipient of domicile certificate. This issuance of domicile is done completely on PRC basis, which means they do not require any other document.

If we speak of migrants in Kashmir they can also get the domicile status. The only condition they are required to fulfil is producing PRC (permanent resident certificate) or they are registered as migrants and have its certificate. The documents that are required to be produced for getting the domicile status includes a record of immovable property, ration card, educational certificates, employer certificate, labour card, or electricity bill.

Government has begun constituting a committee in order to accelerate the recruitment in government jobs. The committee will be responsible to ensure the unbiased and transparent process in the selection.