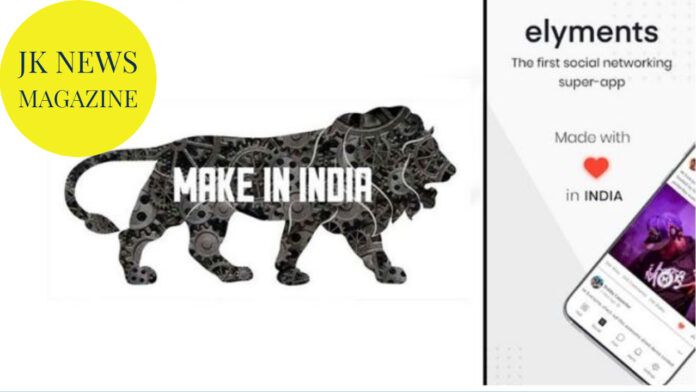 The decision by the Indian government to ban 59 Chinese apps has led to the rise of Indian applications as alternatives. Applications like TikTok which used to be on the trending list are now replaced by Indian apps. During this period, an Indian social media app “elyments” has been launched. This app combines the features of many social media applications and provides instant messaging, voice, and video calls.

Made in India application

Prime Minister Modi has been giving the message of ‘Aatmnirbhar Bharat’ in the urge to create homegrown apps and create an Indian ecosystem of apps and this app is a big step towards it. On 5th July, the vice president Venkaiah Naidu launched this app through video conferencing.

This Made in India application is now available for download on both Android and iOS platforms. The app is made by IT professionals working at the Art of Living Foundation of Sri Sri Ravi Shankar. The developers claim that this is India’s first social media super app and it will likely hit social media platforms like Facebook, WhatsApp, and Instagram. This app is a combination of popular social media apps and works as an allrounder.

Key features of the App

This app is launched at a time when the government has banned 59 Chinese applications due to security reasons and the betterment of the country and its people.

Elyments app is designed to protect the privacy of their users as their primary concern. The user data saved on the app will never be shared with other apps without getting absolute confirmation from the user.

The app puts a privacy guard at a time when many apps from other countries are going through privacy violations. It also comes with features like end-to-end encryption, which assures that user data is safe. The data servers are located in India itself providing a more fast experience and the issue of data transfer is also resolved.

Elyments is a comprehensive social networking app that allows us to connect and converse with friends, families, share updates, watch feeds, make seamless voice and video calls, and much more. It also comes with a Discover option where you can follow celebrities, politicians, influencers, etc.

The app also comes with a built-in camera feature with AR(augmented reality) characters, filters which are helpful in upgrading photography skills and share real-time updates with people. The app helps to keep us updated with the latest news and a variety of other topics.

Being an Indian app, it is available in 8 Indian languages and they are Hindi, Marathi, Bengali, Tamil, Telugu, Malayalam, Kannada, Gujarati, and also English and Spanish.

Elyments have been trending on top of the list of social networking apps with over one million downloads. On PlayStore, it has an overall rating of 4.5. As per the developers, the app is designed in India but it will be connected globally. This app shows that Indian IT companies are now able to make world-class apps with attractive user interfaces and provide better
performance.

The concept of chats, follow, calls across different apps is now available into a single unified application. Users can also go to the ‘Hub’ section and enjoy. These features give it an edge over other social media applications.

Planned to add features such as audio/video conferencing calls

In the coming weeks, the developers have planned to add features such as audio/video conferencing calls as it will be very helpful in this work from home scenario. To promote local Indian brands, a commerce platform is being developed which will also come with a secure Elyments Pay feature. This platform will help in promoting small scale and regional businesses.