Ban Of Pubg To Be Compensated By Launch Of Fau-G

Indian Gamers Are Excited For Fau-G: Recently, 188 China-based applications along with the popular gaming app PUBG has been banned. On one hand, gamers all over the country are upset by the move, on the other hand, some people also believe that this decision was essential for National security.

However, a new ray of hope came with the news of an Indian based game that will be launched soon with the similar pronunciation of banned one Fau-G.

On the evening of 4th September Bollywood superstar, Akshay Kumar declared this news through his social media account.

In his social media post, the ‘Kesari’ fame actor revealed that as the name suggests this game is a dedication to the soldiers of the Indian Army. The actor told 20% of the revenue generated from this game will be donated to Bharat Ke Veer trust, to support the braveheart soldiers of the country. 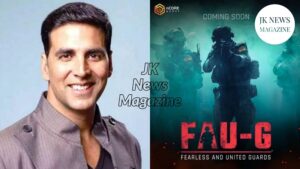 Akshay Kumar has been an open supporter of the current government in India, at times he has also been vocal about appreciating Prime Minister Narendra Modi’s work.

Soon after the ban of Pubg, supporting the cause of PM’s mission ‘Atmanirbhar Bharat’ the actor announced real soon launch of Fau-G. The release date of the game has not been made official yet but nCore games based in Bengaluru is going to publish it.

A veteran of the Indian Gaming Industry, Vishal Gondal has also promoted Fau-G on his social media. The gaming culture in India took a hike after the launch of Pubg, and after being banned in India the internet has been stormed with memes.

The current situation between India and China on the border of Leh Ladakh is the major cause of banning these applications.

The soon to launch game Fau-G is an abbreviation for “Fearless and united: Guards” and gamers are keen to know the release date.

Reopening Of School & Ongoing Pandemic | A Lot Of Things Might Change

Critically Analyzing, Silver Lining At The Time Of Pandemic: Unraveling The Positive Side Of Corona Virus In India

Imposing Property Taxes In Jammu And Kashmir, Another Impulsive Decision By...

The biggest revelation in the suicidal case of sushant singh rajput

Imposing Property Taxes In Jammu And Kashmir, Another Impulsive Decision By...