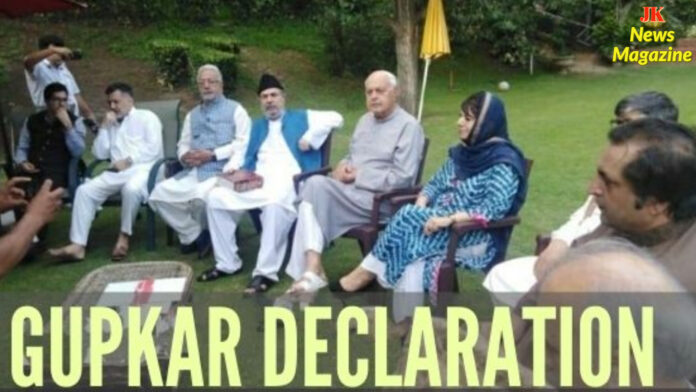 What About Jammu & Kashmir After Modifications In Article 370? An Insight On Gupkar Declaration

The meeting had an objective of deliberating several political situations of the state and representatives of some popular political parties of J&K were part of this meeting. Read More : The NEET & JEE Exam Scheduled Amidst Pandemic: Is It Shiksha…

What were the outcomes of the Gupkar Declaration 2019?

Several representatives who were there at Gupkar residence agreed that the political parties will stand together to defend and protect autonomy, identity, as well as the state’s special status. They agreed to take a stand against onslaughts and every attack that might harm the above factors. They all agree to the fact that Article 370 and 35 A’s abrogation is kind of unconstitutional trifurcation of Jammu & Kashmir.

The representatives believed these modifications are against the harmony of people living in the state. It was resolved that participating political parties of the meeting would seek Prime Minister as well as President of India to draw their attention towards the current situation of the state.

Along with that, they would appeal to them to protect the legal stature of the state and its people. They also decided to apprise leaders of different political parties about the consequences that might occur in case the guarantees are violated unconstitutionally.

To conclude the first Gupkar declaration resulted that all the parties will stand together to struggle for protecting the special status, autonomy, and identity of Jammu & Kashmir. Gupkar Declaration 2.0: What happened this year?

This year the participants of Gupkar Declaration one have spoken again and this time also they have spoken in an even tone. Press statement with the title “Gupkar Declaration II was issued in media as president of National conference Dr Abdullah addressed the media after the meeting with representatives of other political parties.

6 political parties at the Gupkar Residence

All the representatives and political parties are willing to struggle together opposing revocation of J & K’s constitutional special status.

The Gupkar Declaration 2.0 states that the decision of the central government to alter the special status of Jammu & Kashmir under 370 is a step to “threaten the empowerment” of people in Jammu & Kashmir. They also stated this step to be “grossly unconstitutional” as there could “nothing about the state without its people.”

Among two rival countries, a piece of beautiful land has suffered a lot, as a result of which there has been a lack of peace & harmony in the valleys of Jammu & Kashmir. Since the supporters of Gupkar declaration and its ideas have clearly stated that this time they will uplift the struggle.

The Gupkar declaration’s adherents have also declared that they are willing to stand up for restoring the status of the state (pre 5th August status).

The resolution of six participating parties of the state has lightened up the hopes among people who were against the modification in Article 35A and 370.

However, the state of Jammu and Kashmir, as well as its people, has seen enough of the bureaucracy and its games so only future can tell whether these parties will firmly stand with their cause or not.