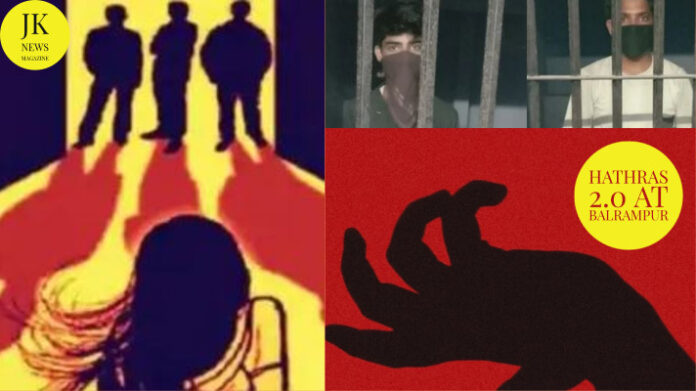 Hathras 2.0 At Balrampur, UP Under Breathes every day Under The Fear Of Raising Crimes

Hathras 2.0 | Balrampur gang rape: With the shaking hands, grieving heart and numb mind we are sorry to reveal another monstrous act that took place in Balrampur district of Uttar Pradesh. A young woman of 22 years was gang-raped and murdered after severe physical torture on Wednesday the 30thof September.

The victim woman was cremated on the night itself after a panel that included four doctors did the post-mortem. Before this incident came into the light, the body of Hathras gang-rapes victim was cremated by stealth at the dead of night.

The increase rate of crime against women in India and specifically in Uttar Pradesh, raise a lot of questions, where do we stand as a society? Even after more than 70 years of Independence in the year 2020. Must Read : Hathras Gang Rape Case | Humanity Died Along With The Victim…

Hathras 2.0 | Balrampur gang rape | just the change in the name of victim, culprits and place

Let’s walk through the series of misfortunate events. On Tuesday 29th of September, a woman goes to take admission in a college which is not very far from her village, she doesn’t get back to home and it’s already dark.

The concerned family members started looking for her and while the ongoing search they found her returning with a drip of glucose in her hand, almost unconscious. She was on a rickshaw and after knowing that she was badly injured the family took her to the hospital nearby.

However, police deny it as they claim post-mortem reports doesn’t confirm it while the family claims that the victim’s legs and hands were fractured.

The brother of victim woman launched an FIR against the two accused men and they are under arrest under the IPC sections 302 for murder and 376-D for gang rape. The Patriarchal Society Is Filled With Toxicity, Hatred and Objectification

“We allow our daughter to do an MBA”, “Our daughter drives as well” or “We allowed our daughter-in-law to do a job” all these progressive statements in a modern Indian household come with a BUT.

We live in a society where the ultimate goal for a woman even in a progressive household is to settle down and have a family. They are suppressed with a very limited amount of choices, and the harassment changes its form from sexual to violent to emotional.

Haven’t we witnessed our father the most perfect male influence of our lives yelling out on our mothers if he is not in a good mood, that passive aggression is the smallest form of toxicity and believe it or not the sense of superiority in the men that are nurtured for so many years results in such unfortunate event and is a prime factor that leads to crime against women.

The level of education is not up to the mark, sex education is still a taboo, the internet is full of unexplained filth and corruption comes in the way of justice. Do we really need more reasons?

As we end the story with a question mark, do ask yourself these questions, Do raise your eyebrows towards your government that claims to be progressive and patriotic.