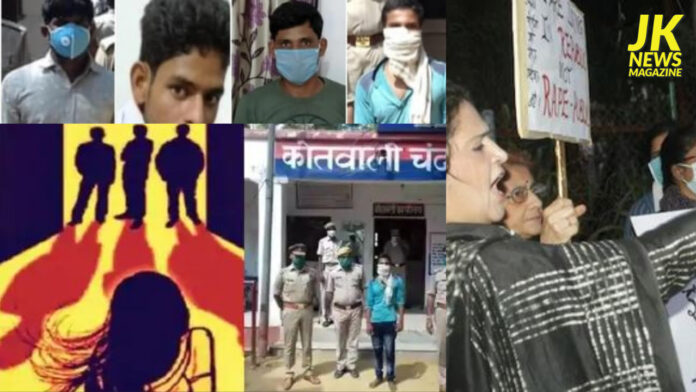 Humanity Died Along With The Victim Of Hathras gang rape case

Hathras Gang Rape Case: When the whole world is going through a pandemic it is expected that humanity will come together and fight against a monster that is in the form of the novel coronavirus. However, some people are not even worthy enough to be called human.

An extremely unfortunate event took place in the Hatras district of Uttar Pradesh where a young woman who was just 20 years old was tortured and brutally gang-raped by four evil men. This incident took place a couple of weeks ago and when mainstream media was busy in heckling Bollywood celebrities the victim of this monstrous act lost her battle of life in a hospital of New Delhi.

There were a number of fractures found on the victim’s body, she was paralyzed and a barbarian act of physical torture was done by the savage culprits while attempting to rape her. People are comparing this case with the 2012 Nirbhaya case that shook the whole country. Such acts show the mirror of our society where on one hand we sit on our comfortable couch and talk about women empowerment and feminism in the big cities and at a distance of few hours people are treating women worse than a non-living object.

The victim of Hatras gang rape case got several bruises on her whole body and deep injuries were found on her neck, the injuries were so brutal that she struggled to breathe and end up being paralyzed.

After going through the medical treatment at New Delhi she left the world that already showed her hell while living. It was later found that woman was in so much pain that she bit her tongue so hard that a deep bruise was left on it while those culprits were strangling her without any mercy. Read More : What Can Stop The Increasing Cases Of Corona Virus In India?

Do the Dalit lives matter in India?

India showed its outrage in the ‘black lives matter’ movement which was about being vocal against the crime and differentiation that happens to people on the basis of their race. At the Hathras gang rape case, all the four culprits belonged from the upper caste and the victim was a Dalit they lived in the same village but of course a very different life.

It is being confirmed, that the culprits will be booked with the charges of murder and currently they are in Jail. Hathras is a very small town which is located at a distance of mere 200 KMs from New Delhi, the capital of India.

While working on the field with a few members of her family, the victim was dragged by her own dupatta, she was also choked with it. The members of the family were working at a distance while the victim was pulled inside a nearby bajra field. Outrage but only by a particular group

Amidst the coronavirus pandemic, a falling economy, farmers’ bill and non-stop non-sense of mainstream media while reporting about drugs and Bollywood a woman died.

Some media houses covered the issue some left it unaddressed, on politics front Dalit leader Chandrashekhar Azad and people of his Bhim Army ‘Raavan’ have started blocking roads in protest. The protestors are raising slogans and are demanding for justice by giving the culprits a death sentence. Just like every other issue, new trends and hashtags came into existence as people took to social media. Several celebrities, as well as politicians, have expressed their anger and grief through their accounts on different social media platforms.

While the members of the family claim that it was a planned crime, Mr Piyush Mordia a senior inspector of Aligarh claimed that the woman’s claim of rape is not yet proved and all the samples will be sent to the forensic lab. Well, may the departed soul of the victim woman rests in peace and she gets the justice without any politicking.