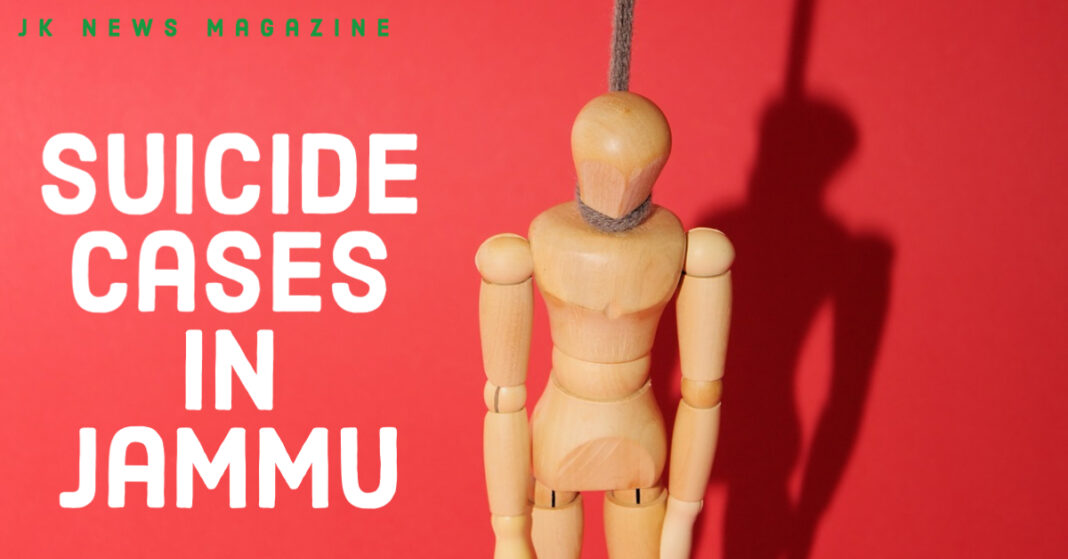 INCREASE IN SUICIDE CASE IN JAMMU

SUICIDE CASE IN JAMMU: Suicide is the self-inflicted death people commit to ending their lives and escaping reality. Many people around you commit suicide. Depression and suicide are rampant in today’s time and are a growing issue of concern. Depression is an illness that pushes a person to commit self-harm or even commit suicide. It is not easy to predict who it will be. Mostly the youths think about attempting suicide statistically.

Suicide is a continuously talked about topic in our society. There are multiple papers, books, journals, and other documents that discuss the topic. These topics discuss the personal experiences of a person who was suicidal or had to face the horror of losing a near and dear person to suicide.

Suicide is a terrible killer of the young. In the United States, suicide is the third major cause of death in 15-to-19-year-olds and the second leading cause of death in college-age students. Suicide kills the young dreadfully and disproportionately and, across the world, in those between the ages of 15 and 44. Suicide is the second leading killer of women and the fourth of men. If we talk about Jammu, the suicide cases are constantly rising; these cases involve youngsters in the age group of 17 to 28 years.

In January 2021, A woman, along with her parents committed suicide by consuming poison, five days before her marriage. Yamuna (40), and her parents, Jeet Ram (80) and Channo (78) were found dead. When relatives of the would-be groom visited their house for pre-wedding rituals.

In February 2021, a new suicide case happened in Kamore village of Samba district, when a newly married woman died under mysterious circumstances.

According to Police, victim Rimpy Choudhary, W/o Tony took some poisonous substance in her In-law’s house and died. When this news spread in the area parents of the victim reached Community Health Centre, Ramgarh where the dead body was shifted for the autopsy.

Later the parents of the victim staged a protest against her in-laws and alleged that this was not a suicide but a clear murder.

After the postmortem, the dead body was handed over to the victim’s parents for the last rites but the angry parents took the dead body to her in-law’s home and forcibly performed her last rites in their courtyard in that locality.

The Ramgarh Police registered a case under Section 174 IPC and arrested the victim’s husband Tony, father-in-law, and mother-in-law and started an investigation into the matter. Parents of the victim urged the police to do a fair inquiry in this case so that their daughter gets justice.

More than 90 percent of all people who kill themselves suffered from a major psychiatric or addictive illness (depression, manic-depression, schizophrenia, or alcohol and drug abuse), a severe anxiety disorder, or borderline or antisocial personality disorder.

Those who are victims of both depression and alcohol or drug abuse are especially at risk. Most people who were depressed will not kill themselves. But of those who do, the majorities were profoundly depressed.

Again in March 2021, one more suicide case happened in Samba, a newly-married woman identified as Pallavi, aged 22 from Kathua, was married to Abhishek Badyalin Samba committed suicide. Her family members and relatives staged a strong demonstration in front of the DC office in Kathua. They accused her in-laws of murdering her.

The family members had kept the dead body of the newly-married on the road and demanded that her in-laws be booked and arrested for murdering her. However, senior police officers reached the spot and pacified them. The body was later cremated in the evening.