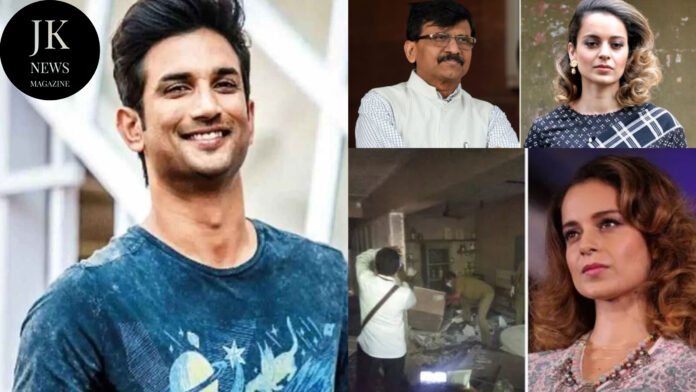 From Justice For SSR To Justice For Kangana and Rhea: The Focus Shift Of Internet & Media

Kangana Ranaut & Her Big Fight With Maharashtra Government to Rea Arrest: Regarding the Sushant Singh Rajput case’s drug angle, actress Rhea Chakroborty was arrested on Tuesday by NCB (Narcotics Control Bureau). The police believe she was the one who used to arrange drugs for the late actor Sushant Singh Rajput.

Showik Chakroborty (brother of Rhea) was arrested a couple of days before Rhea got arrested as NCB got some serious evidence against the brother and sister. However, almost the whole Bollywood is standing up for Rhea Chakroborty as she is alleged to arrange drugs for her late boyfriend. Recently, she has indulged herself in a fight with Maharashtra government as the civic body of Mumbai BMC demolished the illegal construction of her office. Since that incident, Kangana is spitting fire on the internet through her social media account.

Recently, she took to twitter and claimed Mumbai to be the POK, her statement was highly insensitive but she didn’t stop there. She coined the workers of BMC as the Mughal ruler ‘Babur and his army’ along with that she has used #deathofdemocracy in her each and every post. Bollywood Or Bullywood: Kangana’s take on the Industry

In her recent post, Kangana claimed that due to safety reasons while the ongoing pandemic government has banned any type of demolition of the property. The actress claimed there was no illegal construction in her house and whole ‘Bullywood’ (as she coined Bollywood) is watching this fascism.

On the other side of the story, 14 violations have been listed by BMC regarding the controversial actress’s office. Kangana’s office is located at Pali Hills area of Mumbai, in past property of several other Bollywood celebrities has also been demolished by the BMC due to the simple reason of illegal construction.

However, Kangana is not in the mood of any compromise with the situation she has already said a lot of things on social media, the actress also got Y-Plus security from the government of India as she claims Shivsena is after her life.

On Thursday, High court of Mumbai adjourned the matter of Kangana’s property demolition by BMC till 22nd of September 2020.

The BMC claims to demolish 75% of the unauthorized construction of an actress’s property. After the lawyer of outspoken actress Kangana Ranaut responded to the affidavit that was filed by BMC, the court has put a stay on the demolition.

On the other illegal construction is quite common in Mumbai and from businessmen to celebrities from the film Industry had compromised with the law and order. Terrace gym of actor Arjun Kapoor was also demolished by the BMC along with the illegal construction of comedian Kapil Sharma’s office.

All of this started when Sushant Singh Rajput was found dead in his flat on 14th of June, since then several groups are divided in the Industry as well as on the internet.

Some people believe Rhea is the culprit some think she is the victim and in between all this Kangana and her controversies are constant.