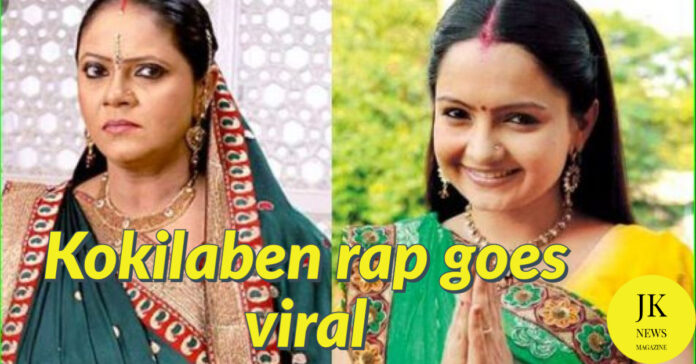 Kokilaben rap song: Internet is one crazy place and if you use it right you can rose to fame in no time. Music producer and singer Yashraj Mukhate has proved this by turning a small scene from an old daily soap of star plus in a rap song.

Mukhate used electronic beats to turn dialogues of Kokilaben in a rap song. Netizens have loved his take on this and the Kokilaben rap song became trending on the internet over the night. Before this rap song, the scenes and characters of this show have been a part of the memes and spoof videos.

However, this is a fresh and new take that is entertaining to such an extent that filmmakers like Anurag Kashyap have also shared it.

Along with that, veteran TV actress and politician Smriti Irani has also shared this video. Thus, it has become one of the biggest internet sensations in India.

Where Did this talent come from?

The creator of this viral video, Yashraj Mukhate is a Music producer and singer. He is quite popular on social media and is known for creating such beat-oriented spoofs and music covers.

He has made such videos picking up dialogues of controversial actress Rakhi Sawant as well. However, his ‘Saath nibhana saathiya’ video has broken the internet as he picked the scene and turned it into a rap.

The musical twist that Yashraj has given to the whole scene has made it so hilarious that it is loved by all. This rising music producer is from Aurangabad and he turned into musician after being an engineer. The run time of the video is less than a minute but it took him about 5 to 6 hours to turn Kokilaben dialogues in a rap.

His video has created a laughter typhoon on different social media platforms and the audience is going crazy about it.

What was the scene behind Kokilaben rap song?

In the viral video, daily soap Sath nibhana Sathya’s one of the lead characters Kokilaben is asking her daughter-in-law about a kitchen mishap.

The scene involved two parallel leads of the show as well. Gopi and Rashi are now becoming a big part of the meme fest along with Kokila. As a result of this madness, the twitter trend of India is dominated by the memes of Sath Nibhana Sathiya.

Along with going viral on the internet, Mukhate is getting popular among some really famous people of the country.

Thus, it would not be wrong to say that the content creators on the internet can rise to fame overnight. Currently, Mukhate has crossed 150K followers on his Instagram account. Fun fact, the maker of Kokilaben rap song has just crossed 100K yesterday.