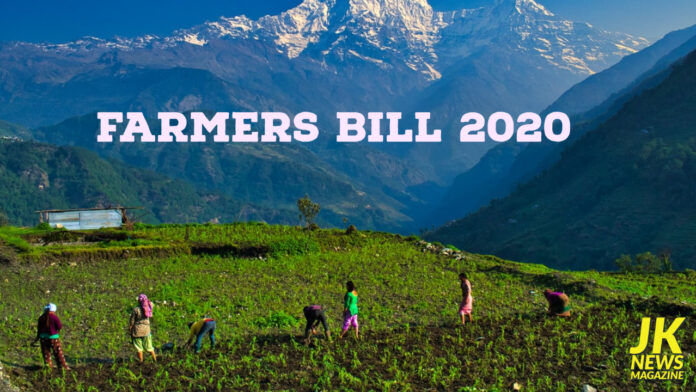 New Farmers Bill 2020 Is Set To Become An Act

Why Indian Farmers Are On The Road & Protesting?

New Farmers Bill 2020: A lot of things are happening from a couple of days in India with the introduction of new farmer’s bill, another class is created in the country. Recently, a law has been enacted that discards the APMC’s (agricultural produce market committee’s) monopoly in mandis.

Therefore, the process of crop’s selling and purchasing outside these market yards that are regulated by the state government is allowed now. However, opposition, as well as farmers, are not at all happy with this decision and with respect to that, Indian farmers called out for Bharat Band on 25th of September.

This bill was not welcomed by the opposition as well and as soon as it was passed farmers have come on the road and started protesting against it. The ruling government claims that with the introduction of this new farmer’s bill, the role of middlemen will be excluded from the buying and selling of the crops. Hence, the income of farmers in India will increase eventually.

However, there is a big flaw in this whole thought process the lawmakers didn’t care about providing security to the farmers in the form of MSP (minimum support price). Now when MSP is not included in the bill, the ongoing protests by Farmers is totally justified and just like every other thing this bill has also divided the country into two groups.

On one hand, government supporters are supporting the bill by claiming that misinformation is being spread about it while the other section believes this bill could bring a big injustice to the Indian farmers.

Neglecting MSP in the Farmers Produce Trade and Commerce bill

The recently introduced New Farmers bill 2020 does not provide any definite backing to the farmers as MSP is completely neglected.

One thing is quite obvious that most of the farmers in our country come from a very humble background, dealing directly with the corporate is quite difficult for a common farmer. There was no mention of any procurement or MSP in the proposed bill and yet last week both the houses of Indian parliament has passed it.

According to the agriculture minister of India, Mr Narendra Singh Tomar MSP, as well as any procurement, has nothing to do with the newly introduced bill.

The minister also said that this bill frees farmers to buy or sell agricultural goods and crops outside APMC mandis. Minister is not wrong still if the provision of MSP was included in the bill the farmers would have accepted the bill in a welcoming way.

Recent Update On The Whole Matter

On 27th of September, the bill reached to President of India, Ram Nath Kovind and he nodded in agreement for the newly introduced farmers’ bill. However, the opposition still claims this bill to be in the favour of corporate and anti-farmer.

By the approval of President, these bills have now become acts and further development for the same is still a mystery because farmers in Haryana and Punjab are against the bill and still protesting.

The prominent leaders from oppositions are claiming this bill as unconstitutional because it does not provides the farmers with any kind of empowerment and they have to pursue their life under the mercy of corporate.

Considering each and every factor in mind, the protesting farmers are not wrong and if MSP was included in the bill it might have actually favoured the farmers of India and could have made them ‘Atma nirbhar’ in real sense.