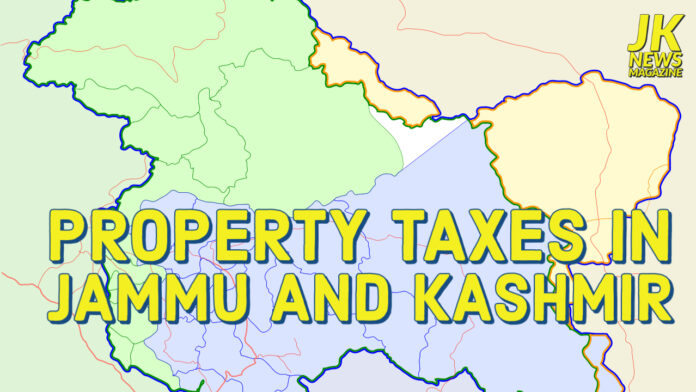 Property Taxes In Jammu And Kashmir: Recently, the government of Jammu and Kashmir has been empowered to impose taxes on properties by the Central Ministry of Home Affairs. This property tax imposed through the Municipal councils, Municipal committees and municipal corporations in their particular area.

This newly imposed tax on properties by the government of Jammu and Kashmir’s union territory will be applicable on all the buildings, lands and vacant lands or on both of them that falls in civic body’s jurisdiction areas unless it is excused under this particular act or some other law.

Read More: Republic TV Network: The So-Called No.1 Channel Of Country In TRP…

Political parties that are functioning in the union territory as well as at the national level are giving a sharp response towards this decision of the central government.

The general secretary and important member of the National Conference have expressed his angst towards the central government for imposing property taxes in Jammu and Kashmir amidst the ongoing pandemic situation.

Leaders of these parties have a solid point for opposing this new tax as the coronavirus outbreak has slowed down the business, tourism and several other economic activities. Along with that, the employment status in the union territory of Jammu and Kashmir is also soaring.

Mohammad also claimed that in such tough situations in spite of helping the people of one of the most suppressed parts of the country, central is making the lives even more difficult.

Property Tax: Injustice or empowerment for Jammu and Kashmir

Different political parties have their different say on everything that happens in Jammu and Kashmir or at any part of the Nation. However, people of Jammu and Kashmir are the only one to suffer among all these ciaos.

Some of the active political leaders have also labelled this new property tax policy as the central government’s injustice on people of the union territory because currently, they are struggling to make their basic needs.

One of the most prominent members of PDP (people’s Democratic Party) has even compared this newly imposed property tax to the exploitative regime of taxation during monarchical rule.

What is the rational take?

Keeping the current pandemic situation in mind, the economy of not only India but the whole world is great suffering and amidst all these things imposing a new tax rule in the most sensitive part of the country is a questionable move.

On the other hand, the present government of India has its own way of doing the things they are decisive but it seems they don’t think about things thoroughly. The lives in Jammu and Kashmir has been facing political oppression, terrorist activities, and presence of armed forces since the eve of Independence till today.

Thus, the development of that particular union territory has been comparatively very low than other parts of the Nation.

The coming years will make it clear whether this decision by the central government will take the people of Jammu and Kashmir closer to development or further oppression. Only time can tell this.

J&K LAND LAW AMENDED BY THE CENTRE: ANYONE CAN BUY LAND IN J&K NOW

Reopening Of School & Ongoing Pandemic | A Lot Of Things Might Change

Critically Analyzing, Silver Lining At The Time Of Pandemic: Unraveling The Positive Side Of Corona Virus In India

Health JK NEWS MAGAZINE - 0
What is Sun Salutation? Sun Salutation also known as Surya Namaskar Yoga is a combination of 12 yoga asanas and is practiced before doing any...

J&K LAND LAW AMENDED BY THE CENTRE: ANYONE CAN BUY LAND IN J&K NOW

Latest News JK NEWS MAGAZINE - 0
J&K LAND LAW AMENDED BY THE CENTRE: ANYONE CAN BUY LAND IN J&K NOW J&K LAND LAW : There has been a historic change in...

J&K LAND LAW AMENDED BY THE CENTRE: ANYONE CAN BUY LAND...

How to download Index of Movies 2020 – Hollywood ,Bollywood, Tamil,Telugu,...

J&K LAND LAW AMENDED BY THE CENTRE: ANYONE CAN BUY LAND...