The FNAF Games: A Deep Dive into the Iconic Horror Game Series

Since the release of the first Five Nights at Freddy’s – FNAF games in 2014, the series has become a cultural phenomenon, captivating players with its unique blend of horror and puzzle-solving gameplay.

In this article, we’ll take a deeper look at the history, appeal, and future of the FNAF games.

A Brief History of the FNAF Games 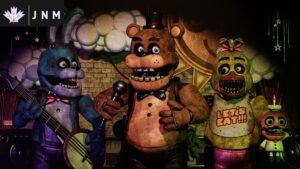 The FNAF games are set in a fictional pizza restaurant called Freddy Fazbear’s Pizza, where the player takes on the role of a night-shift security guard. The objective of the game is to survive the night by keeping an eye on the security cameras and using limited resources to fend off animatronic characters that roam the restaurant at night.

The first FNAF game was released in 2014 and was an instant hit with players, leading to the development of four more main games and several spin-off titles. Each game added new elements and expanded on the story, building a complex and mysterious universe that has captivated players and spawned a massive fan community. 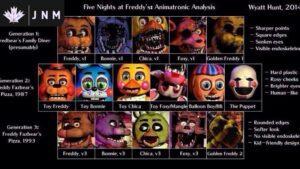 The main FNAF games follow a chronological order, with each game taking place in a different location and time period.

In addition to the main games, the series has also spawned several spin-off titles, including FNAF World, a role-playing game featuring the animatronic characters as playable characters, and Ultimate Custom Night, a game that allows players to customize their own night shift at Freddy Fazbear’s Pizza.

The Appeal of the FNAF Games 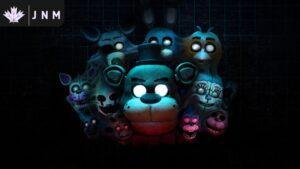 One of the key factors in the success of the FNAF games is the unique blend of horror and puzzle-solving gameplay. The games have a tense and atmospheric atmosphere that keeps players on the edge of their seats, while also requiring them to use strategy and quick thinking to survive the night.

The animatronic characters are central to the horror aspect of the FNAF games. These humanoid robots are programmed to entertain children during the day, but at night they roam the restaurant and can be aggressive toward the player. Each animatronic has its own distinct personality and behaviors, adding to the unpredictability and tension of the gameplay.

In addition to the horror elements, the FNAF games also include puzzle-solving elements, as the player must use their limited resources and the information provided by the security cameras to survive the night. This adds a layer of strategy and problem-solving to the gameplay, making the games more than just jump scares and horror.

Another reason for the popularity of the FNAF games is the rich and complex story that unfolds over the course of the series. The games are filled with cryptic clues and references to past events, leading to a deep and immersive experience that keeps players coming back for more. The story is told through a combination of in-game dialogue, cutscenes, and collectible documents scattered throughout the game.

Also, Read: From Noob to Pro: A Beginner’s Guide to Roblox Sound Codes

The FNAF games also have a strong community of fans who are drawn to the series’ unique blend of horror and puzzle-solving gameplay, as well as the complex and mysterious story. The fan community has created a vast amount of fan content, including fan theories, artwork, and even musical remixes of the game’s music. This community has helped to further spread the popularity of the FNAF games and keep the series alive through its dedicated fanbase.

Also, Read: Crossing Platforms in Dying Light 2: Is Crossplay on the Horizon?

The Future of the FNAF Games

The future of the FNAF games is currently unclear, as the series creator Scott Cawthon has not announced any plans for new games in the series. However, the enduring popularity of the series and its dedicated fan base means that it is likely that the FNAF games will continue to live on in some form or another.

Another possibility for the future of the FNAF games is the development of new spin-off titles or updates to existing games. Cawthon has previously released updates to the main FNAF games that added new content and features, and it is possible that he may continue to do so in the future. Additionally, the success of spin-off titles like FNAF World and Ultimate Custom Night suggests that there is a demand for more FNAF content beyond the main games.

In conclusion, the FNAF games have cemented their place as a beloved and iconic horror game series.

While the future of the series is uncertain, the enduring popularity of the FNAF games and their unique blend of horror and puzzle-solving gameplay ensure that they will continue to be a beloved and influential part of the gaming industry for years to come.

Ans: There are several games in the “Five Nights at Freddy’s” (FNAF) series. As of 2021, the main series includes:

In addition to the main series, there are also several spin-off games, including:

That’s a total of 13 games in the “Five Nights at Freddy’s” series.