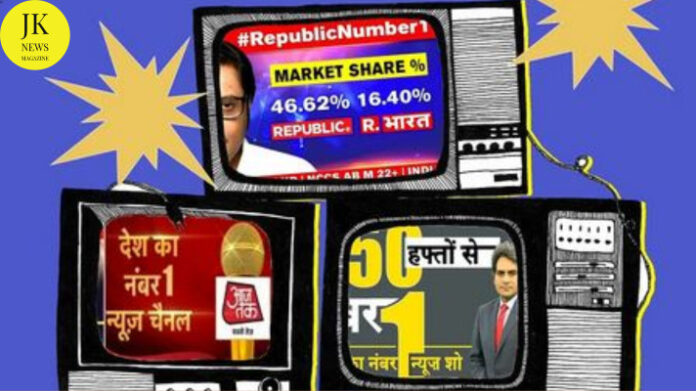 TRP Scam: Over the last couple of months, Indian news channels have brought down the standards of journalism at its lowest. On one hand, we can find a prime time news anchor overdramatizing any and almost every given situation while on the other hand reporters of electronic media were found heckling people from Bollywood that too on several occasions.

Recently, one of the leading news channels of India, Republic TV has been accused of running a TRP scam. The lead anchor of the accused channel Mr Arnab Goswami claims himself to be the biggest nationalist; he clearly appears to be biased for the government of India. Along with the CFO of Republic TV, three other important officials have also been summoned by the Mumbai Police with respect to the racket of TRP manipulation. Mumbai police summoned Republic TV’s CFO but he didn’t appear as a petition has been filed by the channel at Supreme Court. He also made a request to the police officials for not recording his statement and within a week hearing for the same has been scheduled.

On the other hand, Hersh Bhandari and Priya Mukharjee the COOs of Republic TV, as well as Vikas Khanchandani the CEO of alleged news channel, have been summoned by Mumbai Police. Along with the Republic TV Network, the head officials and top office bearers of several advertising agencies have also been asked to join the probe by Mumbai Police. The advertising agencies in concern with the case include Madison Communications and Madison World.

People In Police Custody Are Not Of A Small Stature

Whenever a ship sinks, the clad of rats abort it first but when it comes to the real world whenever a scam or racket is exposed only the common man who was merely doing a job on orders gets caught. However, in the recently exposed TRP scam as per the instructions of Mumbai’s local court four people are under the police custody.

Read More : Critically Analyzing, Silver Lining At The Time Of Pandemic: Unraveling The…

Among the four people, two of them are not any common employee as they include Box Cinema’s owner Narayan Sharma, and Fakt Marathi’s owner Shirish Shetty along with them Hansa agency’s ex-employees were also involved in determining TRPs.

Mumbai Police claims to bust a TRP scam that was undertaken by Republic TV and a couple of other channels Box Cinema and Fakt Marathi. Commissioner of Mumbai Police said in a press conference that police has discovered evidence against the accused channels for cheating the advertisers and running a TRP scam.

According to a witness of this TRP scam, in 2019 January an anonymous person contacted her to place a barometer at her place and she will be paid 483 INR for every month. After a year former employees of Hansa agency who are currently in police custody visited her home for the reading of TRP and maintenance of the Barometer.

Talking about TRP, it is the only motive for which several news channels run in India. The full form stands for Television rating point, it’s basically a tool of judging which program on National Television is viewed the most. It is crucial to depict the popularity bring in advertising slots etc.