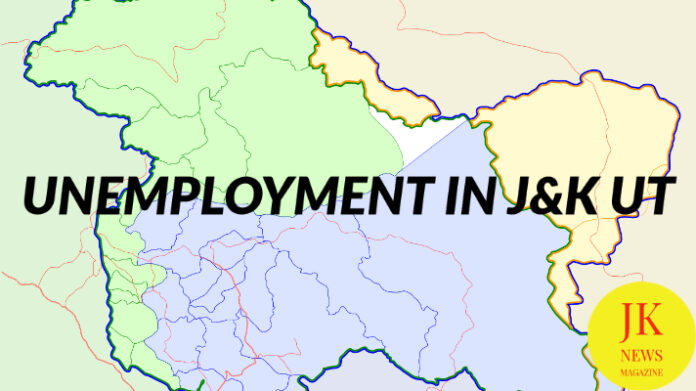 UNEMPLOYMENT IN JAMMU AND KASHMIR The Unemployment rate in Jammu and Kashmir

In August 2019, the labour force participation rate rose a bit to 43 per cent and the unemployment rate rose sharply to 22 per cent. But all labour statistics estimates related to Jammu and Kashmir for the month of August 2019 are unreliable.
They are unreliable because they are based on an extremely small sample of  125 respondents from just 36 households.

No Business for the Entrepreneurs in Jammu and Kashmir

In reality, the UT of Jammu and Kashmir could be suffering a much-shrunken labour force and near-zero unemployment rate. In the lockdown period, shops and markets are closed, there is no one to offer jobs to unemployed. And, there is no business for the entrepreneurs.
Unemployment is a curse for every developing nation.No nation or state or UT can develop unless its labour force is engaged in gainful employment. The whole national income is the sum total of wages, rent, profit and interest.
Thus, when these common factors are employed then national income increases and economic growth takes place. The work participation rate for Jammu and Kashmir was estimated at 34.5 per cent as against the All India figures of 39.8 per cent as per census 2011. According to the 2011 census, the number of total workers in Jammu and Kashmir stood at 43.23 lakhs of which the main workers constituted 26.44 lakhs. From time to time Government announced various schemes to control unemployment and poverty. Some of them are as under:-

How to Control unemployment?

To control the unemployment, the higher administration of Jammu and Kashmir should initiate the three factors I.e primary, secondary and tertiary in a balanced manner. Among the three sectors, the industrial sector is key from both employment and income aspect to the nation.
In India, this sector contributes  30 per cent to GDP and gives employment to 172000 people. In order to curb unemployment, the large scale and heavy industries should be set up in Jammu and Kashmir at the earliest. Also, higher administration as well as UT govt.
Encourage more and more youth by providing financial support with a decent subsidy so that unemployment rate can be controlled and at the same time, UT of Jammu and Kashmir save Rs 800 crores approximately which it pays for importing livestock.
Also, the administration of UT of Jammu and Kashmir provides small loans to youth at a small interest rate so that they can establish their small business units. Today, the government should take serious and fast track measures to tackle the unemployment rate.