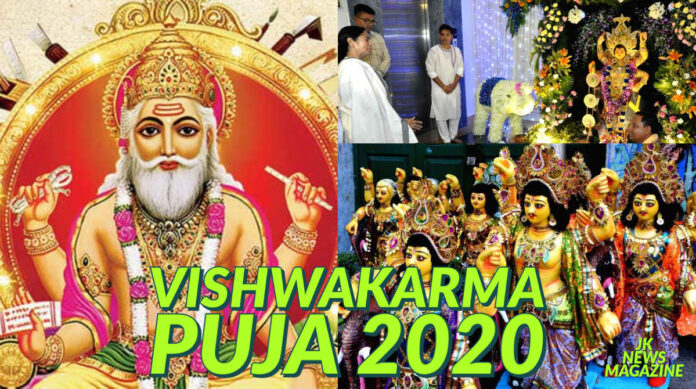 Celebrating The Architect Of Gods On Vishwakarma Puja 2020

Vishwakarma Jayanti or Vishwakarma Puja 2020 is celebrated in the honour of the holy architect, Lord Vishwakarma.

This festival is celebrated all across the country for Lord Vishwakarma is considered as the architect of several important mythological places like Maya Sabha of Pandavas along with that he is also considered to be the architect of the divine city Dwarka.

In the holy books of Hinduism, Lord Vishwakarma holds an important position as he gets the credit for mechanic and architecture science, Sthapatya Veda. It is also said that Vajra of the Lord Indra was also created by Lord Vishwakarma. Time Of Celebration, As Per Hindu Calendar

According to the Hindu calendar, Vishwakarma Pooja falls on Kanya Sankranti, going by the date it is celebrated in the mid of September around 15th to 18th every year.

Some major states of the country like Jharkhand, Odisha, West Bengal, Assam, Tripura and Bihar celebrate this occasion with a lot of enthusiasm. Along with that, the neighbour country of India, Nepal also celebrates it. This festival is basically dedicated to the welders, craftsmen, artisans, mechanics etc. and that is the reason why it is celebrated in Industrial areas or factories.

For the eastern state, it could be said that the last day from the month of Bengali Bhadra is celebrated as Vishwakarma Puja. Going by the Drik Panchang, the Vishwakarma Puja usually falls on the 17th of September. The Festival Of Craftsmen & Their Families

On the occasion of Vishwakarma Puja 2020 along with the god, his Vahan (vehicle) is also worshipped. Just like other deities of Hindu religion the vehicle of Lord Vishwakarma is also an animal, i.e. an Elephant.

Workers worship the tools they operate and use on this day along with those several factories as well as shops also remain close on this day.

The families of workers who celebrated Vishwakarma Puja 2020 also take part in worship, ladies prepare food that is offered to the Almighty and then later on it is eaten by the families as well as the workers. In some parts of the country people also fly kites on this occasion. The worship for Vishwakarma Puja 2020 could be done by a single person as well as by a couple in the premises of the factory or industrial establishment where the craftsmen work.

It is important for a person to take a bath before starting with the worship at the time of the morning. First of all, it is quite important to clean as well as decorate and worship the idols that are present in the temple.

Then the person who is performing the rituals has to offer flowers and tilak (a form of greeting) to them. After that one has to apply vermillion, a very little amount of rice and tilak on several types of tools that are present in the workshop.

Along with that, all the essential things that are required to be there in proper Hindu worship is included.  Family of the workers and craftsmen join their hands to pray for the growth of their skills as well as for the smooth functioning of their machines.

With several things that are involved in the worship of any Hindu god, the sacred red thread is known as kalava is also tied to the machine as well as on the hands of the workers and other people who participate in the Puja.